During the last weekend (2/3 June), Scuderia del Portello took part in the 4th weekend of the 2018 racing season by the Gruppo Peroni Race at the Autodromo Piero Taruffi in Vallelunga (Rome) with 5 cars.

Higher step of the podium (class and grouping) for the crew Ambrosi-Serio. Second place in their class for Cajani-Picchi.

Scuderia del Portello raffled the TROFEO ALFA CLASSIC SCUDERIA DEL PORTELLO for the first Alfa Romeo which was going to reach the finish line; the trophy was awarded to the crew made up of Francesco Liberatore, Vincenzo and Domenico Ferlito, who raced with an Alfa Romeo 75 Group 4.

The Scuderia del Portello’s driver member Roberto Arnaldi, on the other hand, took part in the Alfa Revival Cup with an Alfa Romeo GTAM Group 5. 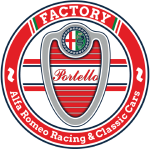